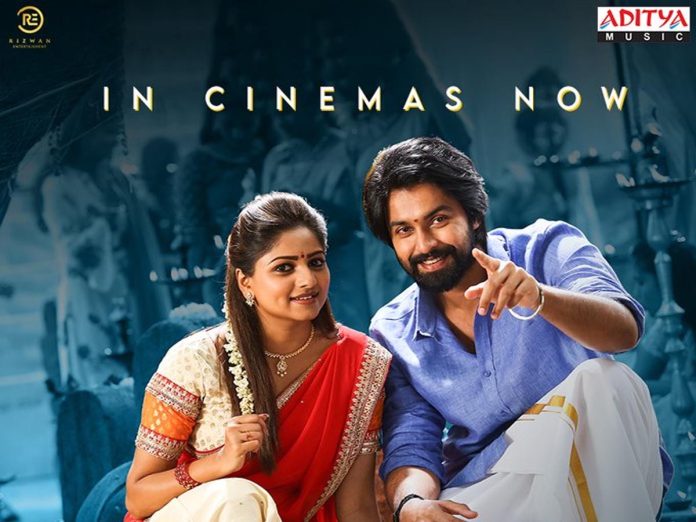 Story:
Raju (Kalyaan Dhev) is a bar singer who spends his jolly time with friends. Meenakshi (Rachita Ram) stalks him constantly, saying that she is madly in love with him. Raju is irritated to the point of calling her bluff. This is when Raju discovers a shocking fact about Meenakshi. He, his father (played by VK Naresh) and his friends are shell-shocked. Who is Meenakshi? What made her fall in love with Raju? Will there be a happy ending?

Performances:
Director Puli Vasu has failed to extract realistic performances through and through. The film doesn’t have a single convincing performance, barring Rajendra Prasad’s. Even when the characters are in deep trouble, their portrayal of pain is artificial.

Kalyaan Dhev, who has previously done ‘Vijetha’, is expected to come into his own in his next film, ‘Kinnerasani’. Rachita Ram, who looks beautiful and is a big name in Sandalwood, delivers a strictly below-average act. Ajay, who was recently seen in ‘Pushpa: The Rise’, is superficial. Posani Krishna Murali and senior Naresh are so-so. Bhadram, Mahesh Achanta, Tanikella Bharani, and Pragathi barely register their screen presence.

Technical Departments:
Composer Thaman’s songs are below-average, while the BGM makes us wonder what has happened to his terrific form. Maybe, the star musician didn’t have any reason to take the script seriously. Aata Sandeep’s choreography has a few bright spots. Shyam K Naidu’s cinematography goes for a toss. Brahma Kadali’s art direction is average.

Analysis:
‘Super Machi’ was not supposed to be a Sankranthi release. The film was in the making for a long time and the laziness in the execution is typified by the way the old-school romance is staged in the backdrop of a beach.

Love stories need strong performances and this one is comprehensively under-performed. Leaving that pivotal deficiency aside, the tropes are too stale to deserve any respect. The concept of a young man or woman falling in love with an unknown person has started sounding flimsy for too long now. It’s 2022 and the screenplay has to be really poetic if such a premise has to be bought by the audience.

The scenes between the male lead and his father (Naresh plays someone who is into the chits business) work to an extent. But the ones between the hero and his typical sidekicks are a damp squib. There are bad jokes and then there are ‘Super Machi’ jokes. Who wants to laugh when someone says their name is ‘Nara Jagan Kalyan’? This is not even YouTube-level humour.

The chemistry between the lead pair is nearly non-existent. We don’t feel for them when they shed tears. The trope of God helping lovers is old-school and the way it’s narrated in this film leaves much to be desired.

Bottomline:
This one is a rom-com that just doesn’t get anything right. Despite the suspense in the tale, there is not a single high point.