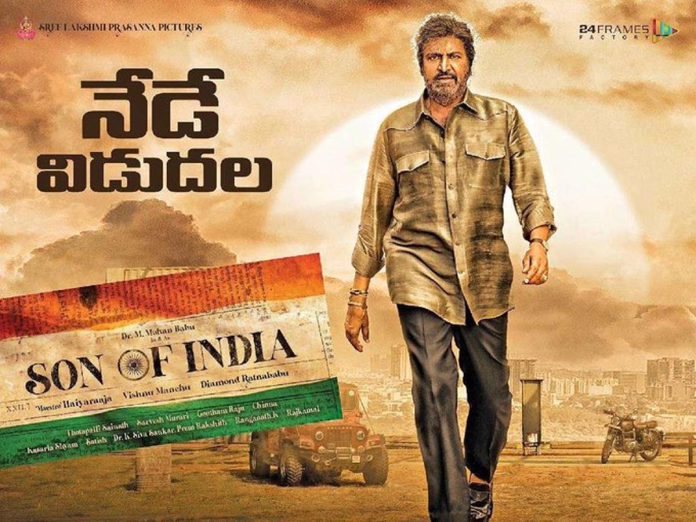 Story:
Virupaksha (Mohan Babu) is a well-respected man in the town. His wife (played by Meena) and his little daughter are his world. A political conspiracy shakes his world and he dons the guise of a driver named Babjee. As a vigilante, Babjee wants to teach a Union Minister (Srikanth) a lesson. What is his motive? Can he achieve what he wants? How does he pull off a feat? Answers to these questions are found in the second half.

Performances:
Mohan Babu is the soul of ‘Son Of India’. Without him, there would be no heft in the vigilante drama. Since the actor hasn’t been seen in many movies for more than two decades, we find him engaging even in poorly-written scenes. His dialogue delivery is earnest.

The rest of the cast gets to give sketchy performances. Srikanth barely makes an impression. Pragya Jaiswal, last seen in ‘Akhanda’, is limited to a few shots. Tanikella Bharani is in a cameo, while VK Naresh is better than Ali and Vennela Kishore. The film doesn’t have much for Prudhvi Raj (who is confined in a PPE kit), Raja Ravindra, TNR, and mothers.

Technical Departments:
Ilaiyaraaja’s music is not memorable. The Maestro has run out of outstanding tunes for films that are set in a certain commercial space. The cinematography by Sarvesh Murari is ineffective. The editing by Gautham Raju is adequate, as the run-time is just about 90 minutes. The Art Direction by Chinna is basic.

Analysis:
Mohan Babu’s character is an advocate for meaningful, fast-tracked justice. Even the trailer had made it clear. He does his homework thoroughly and unfailingly. For example, he gets into the details of even sub-clauses in the Indian Penal Code (read IPC Section 354D, which deals with stalking of women).

Writer-director Diamond Ratna Babu (who is known for movies like ‘Burra Katha’ and ‘Eedo Rakam Aado Rakam’) has based the action drama on the concept of private jails. It’s a radical liberal idea, but the idea is hardly explored in the film.

The second half is pretty much a dash of formulaic scenes. They bank on the lead man’s emotional performance and nothing else.

The film becomes boisterous after the first act, with the drama becoming too self-indulgent owing to the tone and tenor of the story. The scripting needed fine-tuning. ‘Son Of India’ was admittedly made first for OTT. The makers seem to have felt that the urban audience would be able to find merit in the idea of private jails, lesbian sex, and monologues.

Bottomline:
This film needed redemption in the form of a well-rounded narration. The monotonous nature of the script is its biggest undoing.