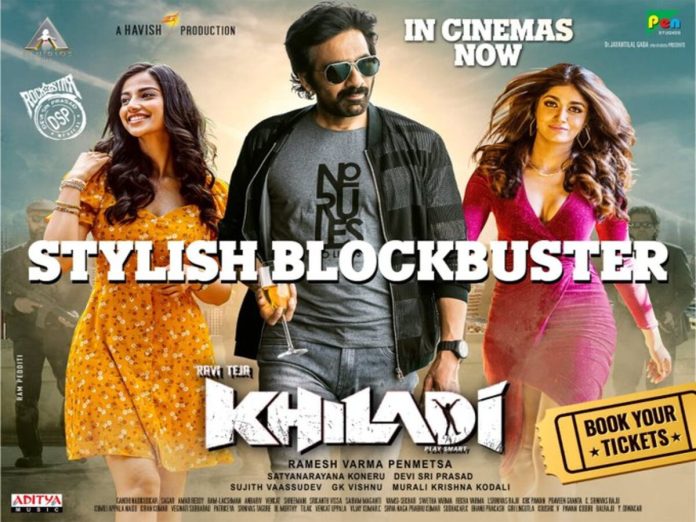 ‘Khiladi’ hit the cinemas today (February 11). Produced by Satyanarayana Koneru and Ramesh Varma Penmetsa, the film is the first theatrical release of the year for actor Ravi Teja.

Story:
An international racket involving Rs 10,000 Cr hits Hyderabad when the Home Minister wants to become Chief Minister. Mohan Gandhi (Ravi Teja) gets embroiled in the racket when his guardian Rajasekhar (Rao Ramesh) is blackmailed by villains. Apparently, he knows the whereabouts of the stashed cash. There comes a twist when we realize that there is more to it than meets the eye. The rest of the film is about Mohan Gandhi’s past and who gets to enjoy Rs 10,000 Cr. A DGP (Sachin Khedekar), a femme fatale (Dimple Hayathi), an investigator (Arjun Sarja) and a mafia don (Nikitin Dheer) are part of the plot.

After a blockbuster like ‘Krack’, Ravi Teja is looking more confident than in the recent past. While he may have lost the kind of agility he was known for in the 2000s, the Mass Maharaja is still very much engaging. The romantic scenes didn’t work for him as much as the action sequences.

The artists who have played either supporting or negative roles are talented but they don’t shine through weakly-written parts. Arjun Sarja is a minor exception though. Unni Mukundan, the Malayalam actor, is okay. Thakur Anoop Singh and Nikitin Dheer, Sachin Khedekar and Keshav Deepak get to play cardboardish roles. Mukesh Rishi is old-fashioned.

‘Attasudake’, ‘Full Kick’ and ‘Catch Me’ are well-choreographed songs. Devi Sri Prasad’s music is foot-tapping in bits and pieces. He needs to up his BGM game, though. The film is aided by two cinematographers (Sujith Vassudev of ‘Miss India’ fame and GK Vishnu of ‘Mersal’ fame).

Analysis:
Director Ramesh Varma, who is also the film’s writer, stuffs the film with umpteen plot points. In the name of twists, a lot of flab is tolerated. The run-time of the action thriller is about 150 minutes and we are bombarded with this or that plot point till the end.
The first half is watchable. The interval block is stylish and some characters show new shades. The songs are not well-placed but the choreography and the screen presence of the lead actors make them enjoyable.

The second half is where everything falls apart. The plot twists don’t hold water after a point. They are far-fetched and don’t convince the viewer at all. The negative characters don’t make much impact because of how they are allowed to be all over the place.
The climax has a routine cliche. The Italy chase sequence was hyped up way too much in the pre-release phase. Srikanth Vissa’s dialogues show some spark.

Bottomline:
‘Khiladi’ is a below-average action thriller with too many far-fetched plot ideas.