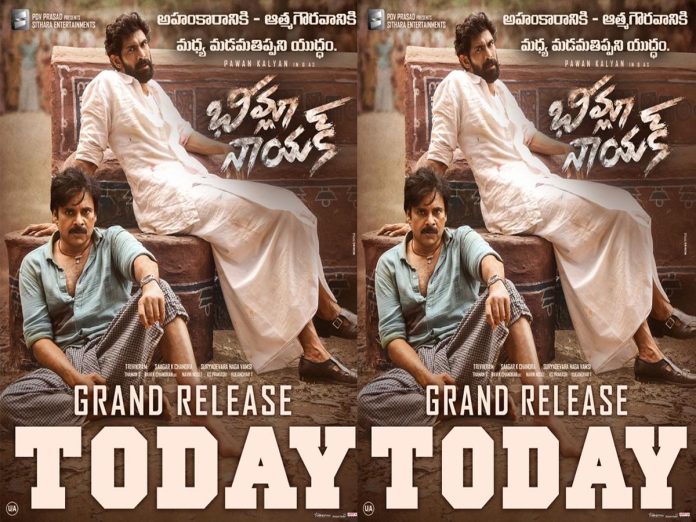 Story:
Bheemla Nayak (Pawan Kalyan) is an upright SI who doesn’t spare lawlessness. He develops a rivalry with an ex-havildar named Daniel Sekhar (Rana Daggubati), whose ego gets bruised after a tiff with him. Bheemla gets into trouble and his doting wife (Nitya Menen) eggs on him to stay the course come what may. Meanwhile, Daniel has to up his game because his father is running out of patience. Who will have the last laugh?

Performances:
Pawan Kalyan has delivered a highly effective performance and the sincerity is on a par with what we saw in him in ‘Gabbar Singh’ and ‘Attarintiki Daredi’. His style and swag can’t be missed. Rana’s performance is able. His scenes with Power Star are made for the mass audience.

Technical Departments:
‘La La Bheemla’ and the title track have been used smartly by the director. Thaman’s background music could have been better at a lot of places, though. The song ‘Antha Ishtam’ has been done away with. The rest of the songs add weight to the film’s overall mood.

Ravi K Chandran of ‘Bharat Ane Nenu’ fame does the cinematography work with aplomb. Navin Nooli’s editing is another winner. AS Prakash’s art direction is worthy.

Analysis:
Due credit must go to Trivikram for almost visualizing this film in its entirety. Saagar K Chandra has executed the film as a director. But it’s Trivikram’s screenplay that made ‘Bheemla Nayak’ a well-packaged entertainer.

The Malayalam original (‘Ayyappanum Koshiyum’) was not ready to be served as it is to the Telugu audience. That’s why someone who knows Telugu cinema nativity needed to reimagine the story. As a result, Trivikram changes almost 70% of the original while keeping the essence of the original plot intact.

The portions that made the original look fatty have been done away with, in the second half. For example, the scenes where Daniel’s friends are lodged in a building are non-existent. The action scenes are crisp, the punch lines don’t look forced, the songs are neatly conceptualized and executed.

If you have watched the original, the first half may seem a bit boring. That said, the song stretches and Pawan’s heroism take care of our sagging interest. The second half has been hyped up too much on social media. Suffice to say that the second half is good and engaging.

Bottomline:
‘Bheemla Nayak’ is definitely the kind of entertainer that befits Pawan Kalyan’s stature. Watch it for the music, Trivikram’s writing, and of course the performances.