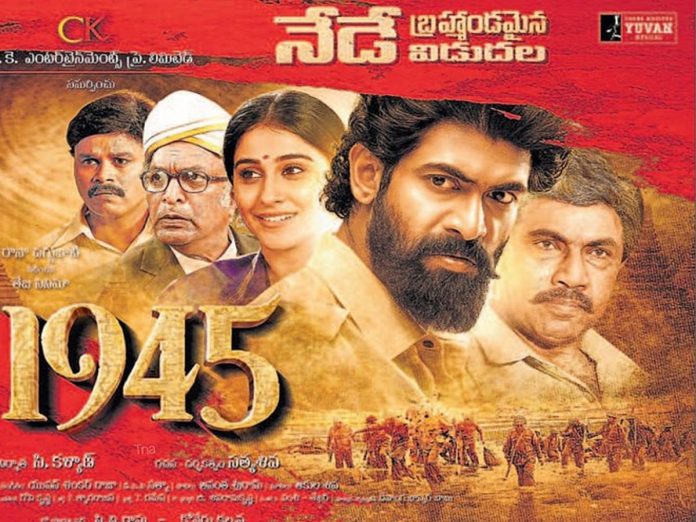 Story:
The story is set in the backdrop of India’s freedom struggle way back in mid-1940s. Those are the final days of the Second World War. Adi (Rana Daggubati) is a follower of Netaji who joins a regiment led by a Telugu-speaking revolutionary leader (played by Sathyaraj).

In their attempt to teach the British a lesson, they face obstacles. Adi’s troubles are personal. He is in love with Vaishnavi (Regina Cassandra). Nasser plays Subbaiah, a loyalist who is at the beck and call of his British employers.

Performances:
This was supposed to be Rana Daggubati’s healthy follow-up to ‘Baahubali: The Conclusion’. Its scale is not big but it is not small either. Since the project got delayed after 2017, Rana eschewed it all together. His performance passes muster in the film. He doesn’t get to do incredible stunts. His chemistry with Regina Cassandra is average. Regina, who is seen as a traditional woman dreaming of getting married to the righteous male lead, is fine.

The film has an understated performance from Sathyaraj. As for Nasser, he has a grey character. Saptagiri, as the hero’s friend, doesn’t elicit laughs. The actors who have played the British officers/generals are routine.

Technical Departments:
Yuvan Shankar Raja’s songs barely register. They are situational and the sound mixing is of low quality. Sathya Ponmar’s cinematography is not bad for a medium-budget film of this sort. It’s the VFX works (thankfully, VFX shots are few and far between) that are outrageously poor.

Analysis:
First things first. ‘1945’ has been made by a team essentially drawn from the Tamil film industry. Barring Rana and Saptagiri, most of the artists seen in the film have worked mostly in Kollywood over the years. The aesthetics of the scenes sometimes reminds us of the production values in Tamil movies.

A positive is that ‘1945’ is not a loud film. It was designed otherwise. There is no screaming, shrieking and all. But this aesthetic becomes a negative feature in the case of action scenes, which feel like a whimper. The action scenes are hurried, lazy and rudimentary.

The film’s main feature is that it’s a period romantic drama before anything. The dynamics of the Adi-Vaishnavi relationship are hardly new. They mirror the age-old stories that are published in vernacular magazines. The lack of inventive lines makes the matters worse.

You don’t buy into anything. Nasser’s grey character bores you after a point. Sathyaraj arrives and wades into oblivion, reappears and disappears. He makes no difference to our viewing experience.

Bottomline:
‘1945’ is an avoidable film about a lazily-written love story that unfolds in the backdrop of INA’s struggle for India’s freedom.