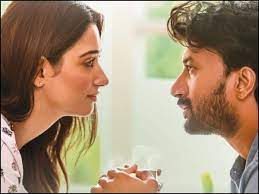 ‘Gurtunda Seethakalam’ is the title of the Telugu remake of a Kannada film. The trailer for the Satyadev Kancharana-Tamannaah Bhatia starrer was released today marking V-Day.

Releasing the trailer, the ‘Sye Raa Narasimha Reddy’ actress described it as tantalizing.

The ‘Skylab’ actor dominates her screen presence, as the story of the film is told from his character’s perspective. His three love affairs fail. The fourth one is with Nidhi (Tamannaah).

To be released in May or June, the film has music by Kaala Bhairava. Megha Akash has a key role in this Nagasekhar R directorial.